We all have an artist within us.  Some of us are just fortunate enough to have found it. 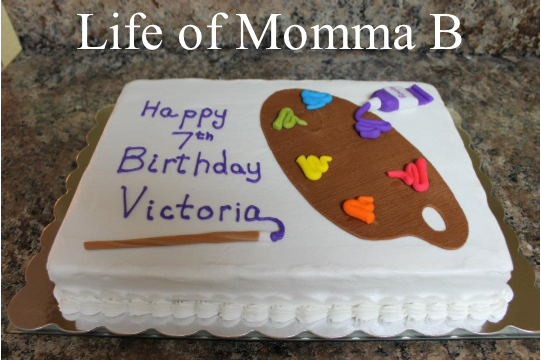 I was recently asked to make a cake for a friend whose daughter was turning 7.  She was having a little birthday party at one of the local painting stores, where the girls got to paint a project to take home.  I was excited by the opportunity to play with my cake decorating toys.

Let me walk you through the cake.

I began with a basic 11×15 sheet cake.  I used my favorite Sour Cream Cake with Princess flavoring.  (It is the favorite among friends).  After it had cooled, I iced the entire cake with white Decorator’s Frosting, and piped on a shell border around the bottom.

Next came the fun part – playing with the fondant. The pallet was created by rolling a piece of brown fondant thin, and cutting out the shape from a template I found on-line.  I did add a little texture with one of my texturizing tools before I cut it.

For the paint on “squirts” on the palatte, I used a small amount of fondant that I tinted colors found in the napkin sample the mom had given me.  I rolled each piece into a tapered log and shaped them as seen in the picture.

The paint tube was the hardest part. Using a piece of purple fondant I shaped a paint tube. I was certain to roll the end.  Using a little bit of water, I adhered the white stripe over the center.  The white piece was thin, so as to represent paper.  I used a purple decorator’s pin to write the word “PURPLE” on the white stripe. The cap and purple paint “squirt” were each made separately and attached with half of a toothpick.

After piping on the words, and creating a fondant paint brush, we were off the party.

Published by Life of Momma B

View all posts by Life of Momma B